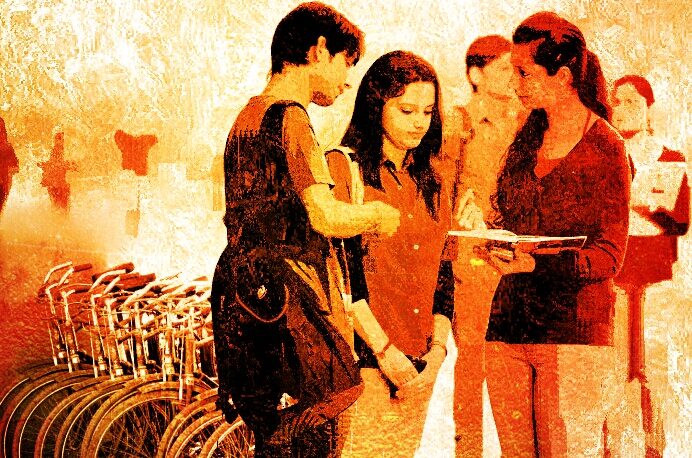 “Whose class is it, huh?”
The most loyal among us stood up and said “Sir, its Sudhir babu’s Bengali class“.

“Sudhir is on leave today,” saying this Tanmoy babu entered the room and sat on the almost broken chair. “Open your books. What did Sudhir teach last time?”

Man, now this is going to be the toughest last 45 minutes of school time to forcefully digest a boring explanation of “Bibhishan er Proti Indrajit” (Indrajit towards Bibhishana – a Bengali verse) from a math teacher!

Chinmoy Sir told us to reach his place early by 6pm today. Topic will be Human Reproductive System. Now even the Almighty cannot stop us to attend his tuition class. We’ve been waiting for this day since we first bought the textbook and had Goosebumps to see the chapter included in our syllabus.

It’ll take almost half an hour to reach home. I took Aniket on my carrier seat and tried to paddle faster than I do normally. He lives in my area. I asked him to get ready by 5pm sharp.

If you were a regular passer-by on Kashinath Chatterjee lane, then you would’ve seen a big group of boys and girls waiting outside Chinmoy babu’s house and talking loudly every Tuesday and Thursday evening. It was an unannounced rule among us to gather at least an hour before.

“See what Khatun is wearing today! Why has she tied her hair like a bird’s nest!!” Aniket whispered in my ear. “Khatun” was a given name of Debolina who used to wear a deep line of mascara on her eyelashes. This girl could get angry in less than a minute, not a unique virtue though!

“Debu! Rupam was telling us that he’s seen you yesterday on someone’s bike! What’s cooking?” I asked her loudly so that other folks could also hear.

Khatun’s face quickly turned into a fireball and gave us an angry stare. “What? Don’t judge anything by guessing. He was my cousin.” We switched the subject immediately.

“Hey, do you guys know the breaking news of Jayati?” Indrajit shouted.
Now that was known as tuition-hopping, where hot news used to spread like wildfire by common informers.
“What happened? Anything with Subhabrata?” Aniket asked.
“YES. He approached Jayati with Mohabbatein leaves and she gave him an apt reply. One Tight SLAP!! :D”

Madhurima was a girl from a conservative family. A bright student. Her mother used to accompany her till the door of every coaching class she attended. To set this type of girl FREE was surely a commendable achievement then. And we made Rupam our pawn! Although our sixth sense suggested that Rupam already had some soft feelings for her.

So Aniket and I masterminded a plan. We had to convince both of them individually that the other person likes you. Where there is a will, there are 100 ways and 1000 partners in crime! Groups were formed among boys and girls and everyone started to play their part on the famous “Rupam-Madhurima” saga.

Gossips were getting hotter. We could collect feedback from other tuition classes. Aag dono taraf lag hi gayi thi (both sides caught fire). But a sudden explosion taught us a lesson in life.

Prajit informed us that next Thursday Madhurima would be going to bring her Hitler mom as they got to know about our plan.

This was a consequence we were not prepared for at all! We thought of bunking off Thursday’s class but finally decided to face it, and received a grand drilling in public. She threatened us to tell our parents next time if we continue doing the same. We decided to completely avoid the topic then onward.

And a month later…

“Boss, do you know the hot news?”
“What news?” I asked Prajit curiously. Aniket was with me.
“Rupam proposed Madhurima last week and she accepted!!”

Love has its own rules. Sometimes it doesn’t appreciate the effort of poor lonely matchmakers. If marriages are really made in heaven, then what’s the use of Shaadi.com or Bharatmatrimony.com? Nature didn’t allow two entrepreneurs to realize their dream then.

Chinmoy Sir opened his book and took a notepad and pen to explain us the detailed anatomy of male genital organ. Just after starting the introduction, he stopped abruptly. Keeping his eyes fixed at his notepad, he slowly said “Mitali, you can leave for the day. I’ll take care from here”.

Mitali di was not a student. She was senior to us and was studying Biotechnology. On sir’s request, she was acting as a buffer in his classes as private tuition by school teachers got prohibited back then.

Sometimes it becomes toughest to conceal giggling in a tight situation like this. Holy fuck that keeps coming back in every 2 minutes. Khik!

“The period of time from fertilization to birth takes almost 9 months. Forget Khudiram’s song. That was wrong!” And we never forgot any tiny part of the lecture given by him that day!

The time to return home was also interesting sometimes. Some guardians had lot of courage to allow their daughters to attend tuition classes alone. Aniket pounced on those “Maukas” without any fail. “Can you guys please accompany me? The road is very dark and full of dogs near my home.” Poor Aniket and I started walking with Moupiya.

I couldn’t realize how that walk helped Aniket to locate Moupiya’s new home, how I started maintaining a 3 feet distance and having a glimpse of them exchanging secret message through a notebook, and how that walk became “A Walk To Remember”!

Tuition classes also happened to be our fake destinations during our “Appo” periods. Nalban, Golpark, Movies all spared the same excuses which luckily were not traceable by our parents then.

Once we succeeded in acting smart for a fellow student who bunked the class that day as Sir had an exam planned for us.

“Prajit! Oye Prajiiiit. Are you there?” we shouted at his door. His father came forward and became surprised to see us. “Where did you guys go? Chinmoy babu’s class was not there today, right?” he asked us angrily and we got the entire plan architected by poor Prajit. “No uncle, we are coming from his class only. There was no such notice he gave. Ok uncle, please tell him to call us when he is free.” we told and started walking beside Prajit’s window. We could hear his dad shouting from 500 meters far. 😀

Bijaya Dasami! Whatever sweets you have had on this particular day, we bet you didn’t forget the ones you had in various tuition classes a day or two later.

Frankly speaking, all teachers were not that generous. So we had different plans for them. “Sir. Kal Satish babu garom singara r amrita khawalo” (Sir, yesterday Satish sir treated us with hot samosa and sweet). Sometimes even such techniques failed. We had nothing but to approach directly then. “Sir. Paisa din. Badam khabo” (Give us money. We’ll have peanuts.)

Do you remember pen fighting? I had a diamond like stone studded pen. One strike and all other pens are out of the boundary. So a rule was set. Every pen had to be of same company and model. And we preferred “Agni Gel!! (a famous “use and throw” pen of our time).We used to show up at least 30 mins before time for Asit Sir’s Math tuition, to utilize that window to organize pen fighting matches in a first floor waiting room at his place. Sometimes we played after the class was over. Our boundary used to be drawn by stolen chalks from school. “Ar ektao jeno chalk er daag na dekhi mejhe te” (I don’t want to see any more chalk lines on the floor) Sir threatened us every other day.

Time fled. Lost touches with several old friends. When today we sit to recall those days, we understand how immature we were then. But, actually those decisions, mistakes, lessons, infatuations, matchmaking, break ups colored the pages of our teen age which we cherish now!

PS: Life is totally unpredictable. The character Aniket finally married Jayati and I managed to conquer the girl next door who never shared any tuition class with me. Madhurima and Rupam are different souls. Prajit is happily married to his n-th crush. Debolina is cool as kulfi. Moupiya has named her son after Aniket. And Mitali di cannot recognize us now.

Can you relate your tuition days with this? Can you identify yourself among these characters? If so, please do click on the Share button and let the class grow.