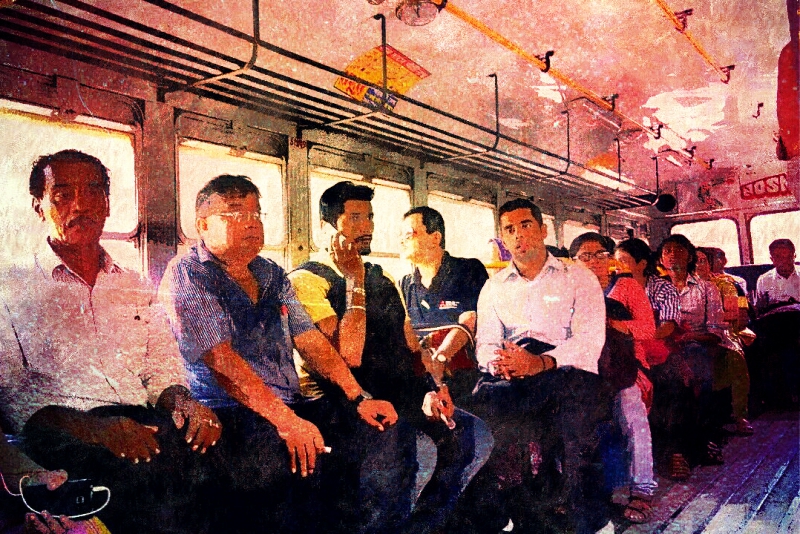 Now, the race starts! The two buses are literally swaying. Ours got a quick way and speeds up to beat the other only to get blocked by its competitor again. It’s a highway and vehicles are coming from both sides on a single lane. I always wanted to do something big in my life. But alas, today is probably going to be my last.

– ‘Yaarki hochhe naki, aste chala suaar gulo’ (Drive slowly you morons) shouted a middle aged man from back of the bus, but who listens.

The fellow bus stopped in the next stoppage diagonally, to block our road again. But this time, with the blessings of Paul Walker, our driver took extreme right and overtook it by driving fast through the mini jungle beside the road. Hip Hip Hurraaaayyy!! God bless NFS! God bless public bus!

God is now standing with his Royal Enfield at the middle of the road. NFS is always incomplete without a cop chase! Driver took a chance to overlook him but received a divine intervention,

It’s their loss but I normally enjoy such punishments when they race. But, lessons are not learnt though. It has become a pre-calculated loss margin for them I guess. ‘Kire kato te rofa holo?’ (How was the deal?) asked the driver. ‘100. Abar ki! Kanar moto chalas na. Mama gulo ke ektu kheyal rakh’ (100 rupees. Don’t drive like a blind. Keep your eyes sometimes on traffic police).

Hawkers are real copywriters, with one-liners that will stay with you forever, like this guy selling Hojmi Guli. Then came our entrepreneur.

– ‘Pen to anek kenen dokan theke. Kintu ajke ami apnader jonno enechhi ekta lobhonio offer’ (You buy many pens from shops. But today I have a special offer for you).

He caught the attention of everyone by standing near the front door and brought out a use-and-throw cheap pen from his bag.

50% of the passengers felt cheated and already shifted their minds towards other things, some putting on the earphones back.

And the guy kept surprising his remaining 10% loyal audience by adding 3 more (total 5) to the set. ‘Ebar bolun. Dekhte gele paisa lage na.’ (Just seeing won’t cost you). His effort must be appreciated. But no one showed any interest. The genius boy sitting beside me asked ‘R ekta add korun, niye nichhi’ (Add one more, and I’ll take it.) If he was on the window side, I surely would have thrown him out!

Normally the buses with 2 doors have 2 ticket collectors. But, I can see only one today.

The sole leader used his brain to lock the back door and operating from front door only. He approached the talented soul sitting beside me. ‘Bhaipo, ticket ta ki korbe na?’ (Hey, won’t you buy the ticket). Being shaken from subway surfing dream, he quickly put his hand in his pocket and took out a Card.

Conductor took that card and after checking it from both sides for a minute, returned that to him by saying ‘Kon tarikh obdhi card ta bohal lekha nei. Puro bhara dao.’ (The end date is not mentioned. Give full fare). Junior Einstein replied ‘March 2015 theke suru kore 4 bachhor validity to lekha achhe. Jog korteo paro na naki?’ (It’s written that 4 years of validity is there starting from March 2015. Can’t you do sum?). Conductor looked at him with indifferent eyes and said, ‘Jog korte janle conductor hotum na! Chhere din. Bhara lagbe na.’ (If I knew addition, then I wouldn’t have become bus conductor. Leave it. Keep your money.)

Suddenly a lady started screaming from behind, ‘Pechon ta khulun. Pechon ta khulun. Bandho keno rekhechhen? Khulun taratari’ (Open the back. Why have you kept it closed?). Reply is thrown from front door, ‘Eka achhi. Aj pechhon khulbe na. Samne asun’ (I’m alone today. Back will not open. Come to front.). Who says our bus journey is always boring!!

The person, who was busy with nose job earlier, started freaking out suddenly. ‘Arey amar pasei darie chhilo. Agei sondeho hoyechhe. Mobile ta nei pocket e.’ (He was standing just beside me. I doubted before. Mobile is missing now) saying this he got off the bus and started running towards the thief whom he can’t track now. Being a coward person in such cases, I quickly checked my pant pocket to be sure if the machine was intact or not. It seems ok, but all is not OKAY in the seat in front of me.

The person sitting beside window shouted. I can see the drops but I can also smell something bad! The standing bag owner quickly pulled it from the bunker and placed it below the seat. ‘Botol ta atkalei to hoto? Ki chhilo botol e?’ (You could’ve locket the bottle. What was there inside). I can predict the answer now as I heard some sounds from inside the bag and felt some movements near my legs. ‘Ki chhilo bol!!’ (Say what was there?) asked the wet passenger loudly. The shameful one replied, ‘O kichhu na. Murgir bachha chhilo. Hisi kore felechhe.’ (That’s nothing. Some chicks. Pissed.)

‘Bantala! Gate e asun’ (Bantala! Get ready.) helper alerted us. Finally!! What a journey it was! I stood up. Didn’t notice when the electromagnetic talent disappeared. I came near the door by pushing three comrades and knocking two others with my bag. ‘Dilen to mariye!’ (Stumped on my shoes, huh!). It’s time to ignore and be free. Stoppage is still 3 minutes far. People are still hanging from the door.

Suddenly my eyes got caught by one of them with a backpack and trying hard to clear his vision towards the ladies seat. I took a glimpse of the girl in red kurti and thin framed specs with braided hair sitting in the 2nd row of the left side window seat and understood the full story. Icing on the cake was missing in this journey which now got fulfilled. I’ve seen the man before also, standing in same position. Our eyes met and he shamefully switched his vision downwards. This man surely needs some guidance and it’s my duty to alert him. Will talk to him later.

Here comes my stop. All passengers, who were hanging, made the way for us to get off. I smiled at that man. He got surprised and climbed the bus again. I took a last view of the red salwar girl and the bus when they both left.

PS: Christopher Nolan was right. 5th dimension does exist. The conversation which I’ll be having with that hanging man has already got published. Another aspect of public bus story is waiting for you there as a bonus. This time it’ll be from the door itself. Have a look at “Thank God It’s Monday!!” and enjoy the interstellar bus journey!
Author: Arijit Ganguly