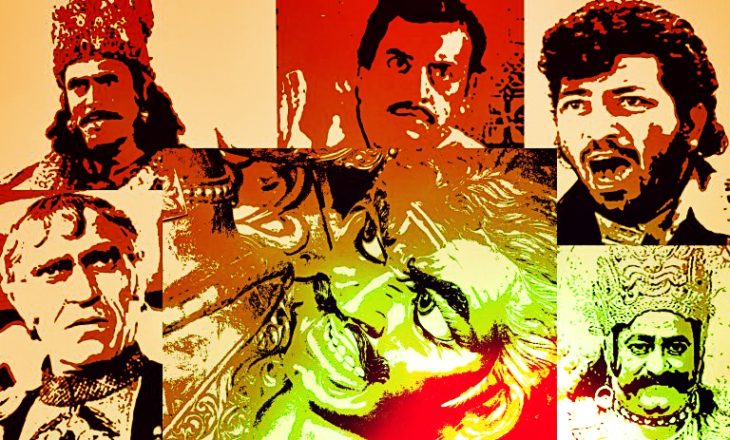 The man in front of him is clearly disgusted, an unshaven face, clad in an army green shirt, and a talisman hanging from his neck. He opened his tobacco filled mouth and said,

Saying this Gabbar took his seat. It’s been long since he was hiding in his closet, after fleeing from the jail few years ago. But this time he has to attend this meeting. It has been called upon with urgent priority; with a letter from none other than the President himself.

Now he is sitting at the end of a large oval table, in a dark hallroom. People are barely using the Writer’s Building these days, and as the whole city is busy in the festival, they found this place to be the most safe and secured, with no major pandal nearby, and most of the Lalbazar staffs are busy in other parts of the city, managing crowds.

Within the next hour, other people started showing up. All took their designated seats, but the president is still missing.

A sudden bouts of thumping announced his arrival, with a skin colour just a tone fairer than blackboard, eyes like ripe cherries, and the big bleeding wound on the left side of the chest. His attire is unmistakable, the Buffalo-Bill of India, Mahishasur.

Mahishasur is panting heavily, while wiping the sweat dripping from the forehead, he muttered ‘Damn these Bengalis, they’ll keep on pouring in pandals, with their wives ogling at my ripping muscles’.

‘I have to stay beneath her feet in the most acrobatically unsafe posture, can’t even flex my back a bit, this humiliation will never end, it comes back each year, just like my arthritis.’

‘This night I had a small window when they covered the idol after the Sandhi puja for few hours, and came running here.’

‘There is a reason why I’ve asked you guys to assemble. This room is now beaming with the best villains Asia has produced in last 1000 years. But you need to answer my one simple question.’

‘HOW DOES SHE DEFEAT US EVERY TIME??’

Old guy, sitting on his wheel chair with a catheter to drain the bladder, replied, ‘Mere paas is ka Uttar nahi hai Gurushree.’

‘All that I had done was suitable for a Man only, to humiliate that woman.’

All Others in chorus, ‘Bravo! Bravo!’

Duryodhan: ‘It was really fun disrobing that witch in front of everyone, but look what she did then, seduced that dumbass Bheem in such a way that he broke my hip into pieces, now I shit myself every now and then.’

Everyone looked at the source of the sound, an old man was shaking in an epileptic fit. That went on for minutes, then few sprinkles of water and odour of Gabbar’s socks made him come to senses, and the very first words he said are:

Once upon a time the richest king on earth, now a filthy beggar.

Mahishasur: ‘Yes Raavan, I heard that you had a similar fate like Duryodhan.’

Raavan: ‘Hmm.. I feel the same way as Duryo brother. I am a man. I have desires. What I can not achieve I must steal!’

All others in Chorus, ‘Correct!!‘

Raavan: ‘That’s what I did, and that woman then stole everything from me. A bloody monkey burnt my golden city, and that “bherua” Husband killed my son and chopped off all my heads.’

Mahishasur: ‘All you stupid idiots, never tried to learn from my fate!’

‘Gabbu, your chhokri, only if you could thought of the name first, Basanti, that’s only her daughter riding a duck.’

‘Raavan and Duryodhan, your Sita and Gita, ah sorry, Droupadi. I’m pretty sure that they are her other forms. That cunning woman comes in many disguises and each time makes us fool. And that Ram specially worshipped Her to kill you Raavan.’

A tapping sound of fingertips is heard from the farthest corner of the table.

Mahishasur: ‘The main culprit is none other than this woman with 10 hands, who keeps Aslan as her pet.’

‘Tomorrow is Navami, our last chance. Let’s be brave and show this woman that her place is on our feet, nor the other way round, but I would need your help.’

Raavan: ‘I will give you my covert LTTE troup.’

Duryodhan: ‘You will have my 99 brothers, god bless our fertile father.’

Taliban: ‘ لتسنمؤ تشتؤتةس هففب زىدلر’ (Interpreter was in toilet at that time, but it must have meant more bloods and beheading.)

Mahishasur: ‘That’s great boys! This time no one can stop us then, we will teach that….’

His motivational speech suddenly got interrupted by a middle aged man who banged the front door open.

Mahishasura: ‘Who the fuck are you?’

Bob Biswas: ‘Maa arrives here for only 5 days and you guys are targeting to kill her! Do you know who rules here for remaining 360 days?’

All notorious villains in chorus, ‘Who? Who?’

Bob Biswas: ‘Listen to the sound from outside.’

A song is playing in nearby Traffic signal, and everyone is all ear to it.

– ‘C’mon guys. We’ll have to uncover the idol again quickly. People will start coming soon. Batul, climb up the ladder and unhook the curtain fast.’

Batul unhooked it and idol of Maa Durga is unveiled again.