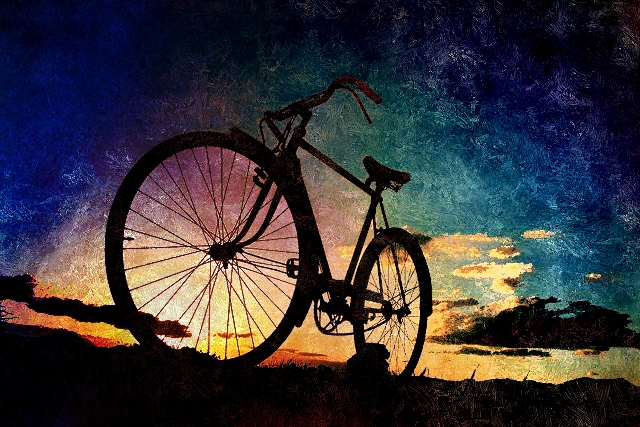 I was standing at the corner of the store, the last one to be sold. Shop was about to close and then he arrived. I observed him carefully as he walked to the door. I knew that time was running out but suppressed the urge to check my watch. I took a deep breath and started counting in reverse under my breath. “Ten, nine, eight, seven…”

Birth is by chance, what you do after that is your choice. My choices are even limited, but I will try to make the most of it. A month ago I was handed over to a teenager. I can still see that day, being unwrapped of the brown cardboard papers and plastics. Poor boy was amazed to have me, took me for a ride to the nearby field.

He was still learning then, so I ignored a few bumps and falls and scratches. All that I needed was love, and having plenty of it. Got new colourful frills for my wheels, a new maroon seat cover, and a happy shower every weekend. He takes me to school, and I feel proud on myself when others envy.

I am playing cricket now! Being placed in a strategic position between slip and gully, I felt proud when Toton patted me and said ‘Bhaggis cycle ta rekhechilum, noyto ball ta pukure porto!‘ (Thank god the cycle was there. Otherwise the ball could’ve dropped into the pond.). My carrier served as a mini dressing room for the budding players. All smelly caps and bags and wet t-shirts were dumped on it. Only if I could warn Toton to keep me locked next time. I really hate the bumpy free demo rides by his greedy pals.

I am friends with a Ladybird now. She looks pretty in pink. I met her outside Toton’s tuition class and had a chat about some regular stuff for an hour or so, while leaning on each other. A nice start indeed!

Things are getting better! I’m spending most of my evenings with Ladybird now. We meet each other outside the tuition classes, spend some time together, and then accompany her home which is completely on an opposite direction to our place, then come back listening to Toton humming love songs. Something is cooking. Definitely a good deal for me!

This weekend was a bad one. Toton was busy with his exam. His dad took me to a local market. Holy shit, it’s not a good place to be in, a total chaos of shouting, bargaining and splashing mud. Came home with two heavy bags hanging from my handles and stains of blood from that smelly chicken. To make it even worse, I would have to wait for the shower till the bloody exam is over.

Something new happened to me today, went to the tuition, and couldn’t find my Ladybird. Damn! She has been kidnapped. But that put a hint of smile on Toton’s face. I only realised the reason when the class finished. He asked the cute girl, ‘Can I give you a lift home?’, and then it began! I am still reeling with the warm touch, the smell of lavender and the soft voice. Best day of my life so far! I bet it’s same for Toton as well who hijacked my Ladybird. Will I be able to see her again?

My back is still aching. God knows why Toton let his best friend ride on me today! His name is Kanchan, but that’s definitely a misnomer, that fat monkey has a bum like a Hippo. Today I realised what is the meaning of eclipse, when he sat on me!

Toton is taking his love story to a new level. Double carrying the girl to her home has become a routine now. But he drops her a good 100 metres before her house, I don’t know why! As I don’t understand the reason of them sitting behind the bushes for so long, while I’m standing and being drenched in rain. Spending pocket money on super flop movie shows has become their habit.

A secret! Last Friday evening, when we were returning from tuition, Toton took us via a detour. The road was very lonely and dark. I looked up while being paddled and saw the girl’s face was turned towards Toton and both their lips were locked!

I quickly need a human dictionary to keep myself updated for such intimate sequences.

Just been through a horrible time. Toton took me to Archies shop this evening. He went inside keeping me against a wall next to the store, but forgot to lock me! That’s expected when someone’s mind is possessed by an opposite sex. Anyway, I was waiting and suddenly felt a touch on my back, a dark lanky guy. A pair of deep sitting eyes quickly checked my lock and lit up, he held me and started walking, Oh no! I was having the same fate as the lady bird! Realised how much handicap I was, couldn’t even shout, what’s the point in having a mind then? That stealer was about to ride me and Toton came out of the shop, looked at him and grabbed him by his collar, but then the sly mugger swiftly released himself and disappeared in crowd. While returning home heard Toton talking to himself ‘Thank God! Dad would’ve broken my spine in thousand pieces today’. I’m confused on who is closer to my feelings – Toton or his dad!

Just returned from the Ganges ghat. It’s the calm river bank where Toton took me with his friends a few times in the past. But today it was different. Only him and I. I saw him crying. I didn’t mind when he kicked me once. I know it was out of frustration. It’s been 2 weeks I’ve smelled the Lavender, and I have a feeling, that both of us have lost it forever. Tough time!

Toton is going to college now. He looks at me only on weekends, when he takes me to Mandirtala. He has started smoking with his friends now. I don’t like it at all, so I did something yesterday as revenge. He was returning home from adda with one silver coloured disk with a hole at the centre attached to my carrier, and by applying a double amount of clip force, I broke it! 😛

Today I heard his friends shouting at him, ‘Notun Japanese video chhilo sala! Amader dekhar agei venge dili!’ (New Japanese video was there. You broke it before we could watch!).

Quick update. Toton is in love again! At night when everyone is asleep, he comes down the stairs, sits on the back porch where I live, and starts whispering over on a tiny object, fixed to his ear and his other hand covering his mouth. Most of the words are fermented with affection, a few naughty ones too with annoying sounds appended at the end; the poor lad thinks no one is listening to him!!

His ignorance towards me got noticed by his uncle and he is trying to own me. Save me Toton! I need your help! Only if he could hear me!

I was not allowed to write for last 7 years. Long story; will tell you later. It’s been couple of years since Toton has got married, not to the last girl we knew. That fat-ass Kanchan stole her.

Now Toton returns from local market, hanging two heavy bags on both of my handles, just like his dad, but I like this now, it’s Toton after all. Yesterday I got a tiny red seat and two tiny foot-rests on me. Getting a new friend it seems!! 🙂

Both of my tires have been changed countless times so far after innumerable attempts of putting patches to leaks. Got a pair of new brakes 2 years ago. I was making a few noises since last few days, being rusty, now waiting helplessly at a repair shop. Toton has got a new Car now. I don’t suit his status.

Toton took me out yesterday and started paddling slowly. He stopped for a while near the lonely roadside and kept on looking at me for more than 2 minutes. Till that time I had no idea that it was going to be the last journey with Toton aboard!

He left by handing me over to a guy I never saw before, and he never looked back. He has sold me to this guy who would break me into hundred pieces and fit them into different new frames. My time is perhaps coming to an end! Hopefully, this is my last entry.

Now I’m thinking, “Will I really be myself again”? Maybe I will, as the metal frame will still remain somewhere, carrying my memory!

PS – If you get hold of this diary, please SHARE it with others. We live a short life but it’s you who give us the driving power to avoid all obstacles and enjoy the every moment of bonding with you. Glad to be the best friend of your childhood. 🙂

Thanks Arindam for gifting us a bicycle. Hope you enjoyed buying it for us and not asking for a payback!

Thanks Toton for giving us permission to publish the diary. We pray for your best friend to come back again in your life.