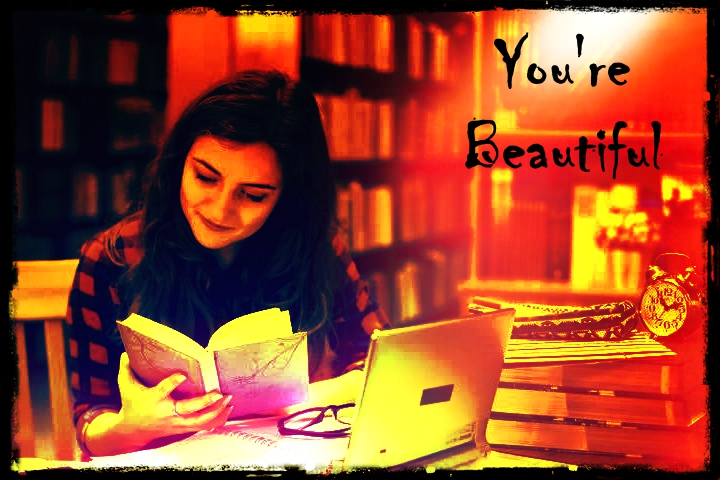 “That man waved at me… and smiled…”

“But I saw him looking at me before he started waving… I swear.”

“That’s just not possible…  May be he waved at somebody behind you.”

“Yeah… you are right… I have gone out of my mind; let’s get out of this library… It’s so crowded today…”

And they strolled past the man, who she thought, waved at her… now busy reading a book. She shook her head and moved away.


When both of them finally moved out of the library, he looked up, closed the book he was pretending to read and smiled. He could not restrain himself from staring at her.

“She is so beautiful…”


He kept on tossing and turning in the bed that night. Her eyes, her beautiful eyes, mesmerized him. His nostrils filled with her enchanting perfume every time he inhaled.

He could not sleep. Yards and yards of her black hair wrapped around his whole body the moment he closed his eyes. Good dream… bad dream…he did not care! He just wanted to have her, with him, forever.

He had many of them but it seemed as if she was the elixir he was searching for his whole life. She would make him complete. Her thoughts kept him awake that night.


As luck would have it, the very next day, he found her alone in the library. The other one was nowhere to be seen. He waited for some time. But the other one did not join her. So he raked all his thoughts of her and walked slowly towards the darkest corner of the library where she was sitting, suspiciously looking at everyone. She froze her gaze on him as he approached her.

She looked at him, unbelievingly. He was smiling right at her. There was no confusion today. He was definitely smiling at her only.
He grabbed the chair opposite to her and sat facing her, still smiling. He extended his hand towards her…

“Hi… I am Neerav. And you are??”, he whispered, making sure that nobody was disturbed.

She looked startled with this whole turn of events. After all she was never approached by someone like this. At first she hesitated, but then extended her hand too. He held her hand.

Her eyes moved slowly from his hand to his face as she felt the warmth of his hand moving into her own hand.

“Ragini…”, she too whispered and pulled her hand back, not averting her eyes from his face.

She still had the same surprised expression and he found this funny. He has never seen anyone so horrified of him. His earlier experiences were too smooth. A smile, a look-into-the-eyes, a warm touch of his hand and they were done. But she is completely different and moreover difficult to impress. And it added a kick to this whole experience for him. Now he desired her even more.

“So… you come here often?”, he asked casually.

“I love this library.. good collection of books.”

“You are not reading any books though…”

“I normally come for solitude here… too many people and chaos make me dizzy.”, she seemed little bit relaxed, though not completely.

“Ohhh… interesting…”, he smiled again. He needed one more touch and he knew the warmth of his touch will work this time.

He looked into her eyes and immediately knew she was calculating… about him. Could she read mind too!! She did not cease to surprise him. She is definitely far better than the others he had met before.

He casually put his hand on hers, caressing lightly. This time she did not pulled her hand back. She slowly started absorbing the warmth from his hand. He smiled again. And this time she smiled too.

She seemed to be thinking something. He knew she was going to say No. But she surprised him when she nodded her head in agreement.
He stood up and so did she. He started to walk. She followed him.

“What a handsome idiot!!! Humans are idiots”, she thought and wrapped her hand around his arm, soaking up the warmth… the warmth of a living body. They thrive with this kind of energy… theirs being gone a long time ago. She started to imagine what it would feel to have every single bit of this energy from his body. This one thought made her cling to him even more.

He felt a tinge of pain in his arm when she came so close to him. He looked at her. She smiled. He felt nervous for the first time. This never happened before. He smiled anyhow.

It was dark outside. The street, leaving from the library was deserted. She could not bear anymore… being so close to a beating heart. Her black hair slowly started to twist itself to a rope and it wrapped around his neck as she pulled him onto her.

At first he could not understand anything as it happened so fast. At one moment they were walking and in the next she was kissing the daylight out of him. And what was that around his neck, slowly chocking him to unconsciousness? His head started to feel light.


He entered his room. It was dark. He switched on his mobile and went to the cupboard. Took out a small glass bottle from his coat pocket and put it on the top shelf and flashed the mobile on it. First it was just smoke in there. As it settled after couple seconds, there was a small silhouette of something… rather someone. He went a little closer and the figure in the bottle also came closer to the side of the bottle.

“Beautiful… “, he said, “I have seen so many dreadful ones… But you are the most beautiful I ever encountered; and the smartest one too. I had to have you with me forever. Your soul is mine now…”

She looked through the glass towards her left as he, the soul trapper, pointed the mobile there, and to her surprise there were many more such bottles, each having a soul entrapped there. The other one, who accompanied her to the library the day before was also there in a bottle beside hers. But she was definitely the most beautiful among all of them…

She stayed there, hovering in the bottle, as he closed the door of the cupboard.