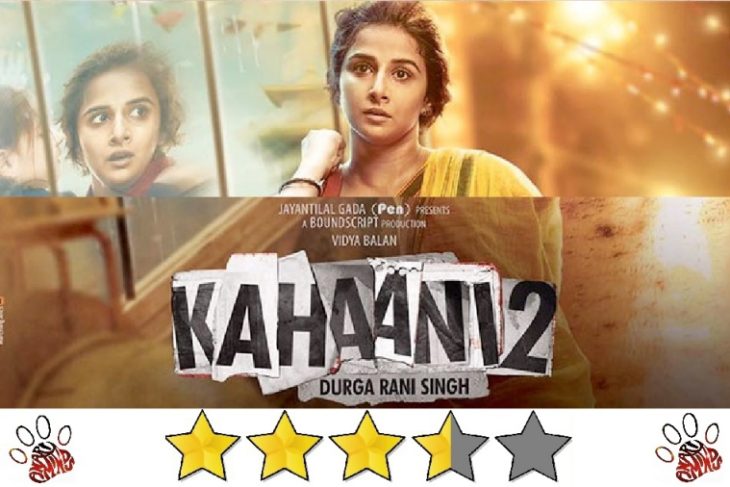 It’s difficult to make a second installment of a cult film released 4 years back and how it won our hearts. That film invented Kolkata as a shooting sensation, created so many immortal characters like Bob Biswas and certainly Vidya (Bidya). Now again, Sujoy Ghosh is back with his new baby Kahaani 2 with a fresh story and all new characters.

Kahaani 2 starts with Bidya (not vidya) living with her wheelchair-bound teenage daughter Mini in Chandannagar and she is very protected about Mini, planning to go to USA for her daughter’s treatment. One night she returns from office and found that Mini is missing. The kidnapper calls and wants her to meet. She runs in trauma and hit by a taxi and goes into coma. Arjun Rampal as sub inspector Inderjeet Singh starts his investigation and then the real story begins. Is the lady lying in hospital Bidya Sinha or a kidnapper-murderer Durga Rani Singh?

All this happens within first 15 minutes of the film. It feels the same tight, engaging thrill. Inderjeet starts reading Bidya’s diary and the story written over there takes us to flashback which reveals the terrifying, brutal sides of child abuse.

Cinematographer Tapan Basu’s work is captivating. He gives the right content of darkness into this film, irrespective of the film locations,  whether its Chandanagore or Kalimpong. Background music director Clinton Cerejo surely helps you to fasten your seat belts. Thanks to Sujoy Ghosh’s tight screenplay and Namrata Rao’s pace-enhancing editing. Kahaani 2 has one of the best first halves I have seen in a while. It never wastes your time.

But while people are ready for more mystery to be unveiled, the 2nd half of the film becomes predictable. There is a forced hurriedness to reveal the mystery. This type of film demands a memorable villain, but suddenly the director ended villain’s part in a very amateurish way. The climax of the film is mediocre.

Despite all these wrong sides of the film, each and every actor makes this film worth a watch. Arjun Rampal is shockingly impressive, Kharaj Mukherjee is as loud inspector Halder, Yugal Hansraj, Tota Roychoudhury are all impressive. The one woman who keeps you watching is Vidya Balan, she just surrenders herself into this film.

We can’t forget Kahaani. The sequel won’t give you the same impact you felt for the first one. But it deserves a watch. It’s not that every time we watch a great film. At least what we can do is to watch the film to support the effort put into it.

Reviewer ~ Souparna Dutta. A 2011 I.T. passed out from MIT Bishnupur, now getting paid by Cognizant. Interested in music, films and photography. He wants to do something that makes his soul happy. You can wish him on 30th April ;). For more details, meet him. Or you can spam him at [email protected]

One thought on “Kahaani 2 : A Quick Review”