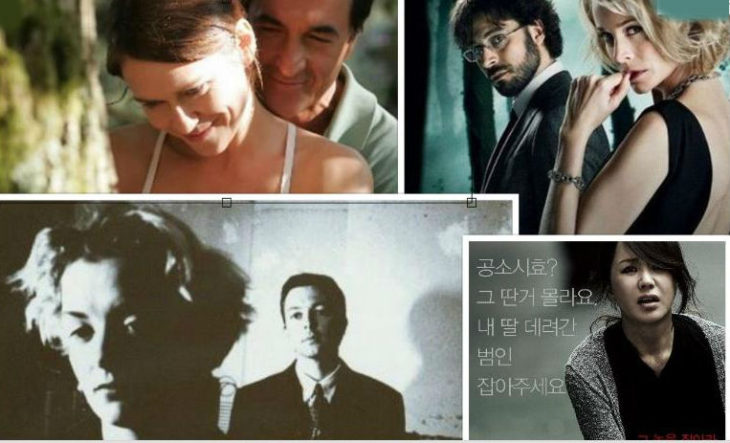 Suspense, excitement, surprise, anticipation are cherished by all of us, while watching a great thriller movie. And if it successfully delivers a great twist in the end, then that makes our day.

We bring you the list of most exotic thrillers from around the world created with great concept, but somehow it went unnoticed by most of the people and these movies didn’t gain the popularity that they deserved.

As a young film student in Madrid, Ángela decided to write about the violence and gore shown in movies. During the research, she and her partner Chema, found a snuff movie in which a young girl is being tortured and killed. Soon they discover that the girl belonged to their school….watch the movie to find out what happens next.

The debutante Spanish director Alejandro Amenábar starts the movie brilliantly (with a magnificent mix of music and images) and it develops into a beautifully crafted thriller. The actors did a marvelous job, specially Ana Torrent as Ángela and Fele Martínez as Chema. This movie delves deep into people’s fascination with violence and death, making it disturbing, terrifying and intelligent. At times you’ll find it a bit slow, but some moments will definitely leave a mark on you. Using phenomenal tracking shots, cross-referenced POV and suspenseful tension to maximum effect, he and his cast convert what could have been a hack DePalma style Hitchcock rip-off into art.

Rituporno Ghosh, a critically acclaimed and immensely talented director of Indian Cinema, crafted this beautiful piece of thriller with a great script, super talented cast, and  a remarkable way of storytelling riveting till the very last minute. Based on Agatha Christie’s novel, “The Mirror Crack’d from side to side”, the director did an extraordinary job to carve out a screenplay depicting an Indian situation. The plot has many interconnected characters, moving in parallel with each other to solve the murder mystery.  It would be a spoiler to summarize the story a bit. I bet most of the worldwide movie viewers haven’t seen this movie yet, so why wait, just go and check it out fast.

Eight years ago she was murdered and today she emailed her husband, stating she is alive. And he is the prime suspect. The rest is a gripping French thriller directed by Guillaume Canet, which will keep you hooked till the end. As the protagonist starts to dig deeper and deeper to try and uncover the truth, you are with him all the way discovering things as he does and when the whole thing finally unfolds it really is quite breathtaking. This film for me had everything, a brilliant script, a seasoned cast, twists and turns, great background score with songs of U2 (“Bad”, “With or without you”), stunning cinematography, complex subplots that never once get too confusing. It truly is one of the most enjoyable and intelligent films you’ve seen for a long time. Based on the famous novel by Harlan Coben, the movie surely is underrated worldwide.

Well, what’s the elements of a perfect thriller movie? Mostly it is who the murderer is and what the motive of the murderer is. This highly underrated Tamil thriller, written and directed by P. Ramesh has depicted these two things wonderfully.  Trust me, you won’t be able to guess the motive right because it is fresh and unique in its nature and can happen in anyone’s life!

Thegidi begins with the protagonist Vetri, who after studying criminology, joins a detective firm in Chennai. He falls for his new subject Madhu, but suddenly realizes that she is in danger and now a series of killings get triggered. The movie although has an open ending (again the clue was there to be seized by a keen observer) making room for an intriguing sequel.

How can there be a list of thrillers, without a Korean movie? So here comes a superbly built, edge of the seat Korean thriller, Montage, which is highly underrated among the most outstanding and famous Korean revenge movies like The Raid Redemption, Oldboy, etc. 15 years ago, a child was kidnapped and murdered, the case remains unsolved and is going to get closed in few days, when suddenly another child got kidnapped in a similar way. Is this the same kidnapper or is there a connection with the past incident? The mother of the murdered child won’t let it go unsolved this time. The movie is fast paced, have great plot twists, and will make you wreck your brain till the very end.

#5 The Treatment (2014, Belgian)
A dark Belgian thriller, The Treatment, is a story about an inspector Nick Cafmeyer, who seems to have got everything in life, but the incident of unsolved disappearance of his younger brother Bjorn is haunting him. In the present, he is faced with a case where a mother and father are found brutally tortured and their son is missing. Nick’s determination to solve this case grows more and more personal as his pursuit of the truth borders on unhealthily obsessive. Could it be connected with his brother’s unsolved kidnapping?

This kind of movies go slow, engage you bit by bit, and then a stark climax, leaving goose bumps on your skin. It has got some amazing performances from both the protagonist and the antagonist, and the director, who has to do a really great amount of hard work to captivate the audiences till the end of the movie, which it does.

Benjamin, a “nobody” in real world, but “somebody” in the world of computers, joins a group of extremely talented hackers. They meet up, form a group CLAY and begin an expedition to make a global recognition as Big Players online. But a murder of a fellow hacker Krypton, provokes them to stop a fatal hacking group FR1ENDS and unmask their hacking idol MRX, which leads them to get trapped deeper and deeper into the web of the internet hacking.

This movie has immense plot twists, which will grip you and play with your mind till the end. Though the movie is based on technical concepts of hacking, but thanks to the director who shows it in a simple manner, using visuals. If you like hacking movies and tech-savvy stories, then you would surely enjoy it. Highly recommended.

Anurag Kashyap is known for his genre of crime drama movies in Bollywood India, yet Ugly was left unnoticed by many of the Indians.

This is a dark thriller about a 10 year old girl, who is kidnapped. During the proceedings of the investigation, the characters connected with the girl reveal their ugly true self, pertaining to greed, self-interest and deception.

The plot is intriguing, the characters are complex, the background score is chilling and the script hooks the audience with one revelation after another. Applause for Kashyap for carrying out such a masterpiece. One note to the viewers, the ending will definitely haunt you for days to come, and will make you think, as a human being, was all that really needed!

Everybody knows Christopher Nolan, thanks to his remarkable Batman Trilogy, but very few have seen his debut movie as a writer and director of “Following”. The concept of the story is out of the box, gripping, crisp and compact. With a runtime of only one hour and nine minutes, this movie is going to make you say “Wow, what a movie I’ve just seen” while the end credits rolling. It’s about a young writer, who follows random strangers around the streets of London to get material. One fine day, his subject, a burglar, catches him on the act, takes him under his wing and shows him how to break and enter. Then a journey of love, trust and deception goes forward to make a stark revelation in the end. Add this to your watchlist as soon as possible.

Who doesn’t like the kind of storytelling, which you will go on guessing about the motive and the convict, and in the end it amazes us with something unique and mind-boggling, so that you cry out “Oh holy shit! So this was the reason for everything!” .

The Body (“El cuerpo”- original title) does that to you. Based on immensely engaging plot of a dead body that goes missing from a morgue, it enthrals you by the way the director shows you the investigation. In no part of the movie you will feel lost and bored. So go and check out this movie as soon as you can.

Well these our list of 10 thriller movies that we think every movie lover should watch. There are some honorable mentions, which didn’t make up to the list but are really an underrated and unnoticed out of the box thrillers like,

You have another set of list that you want to share? You are most welcome. Please let us know in the comments and we may get in touch with you and you might get a chance to get your list published on our blog!

Author ~ Soumik Sarkar – SomeOne Unique Musical Ingenious Kool – A software developer by profession, passionate about music (his vocal cord does wonders), film making and watching movies. He is our in-house movie freak and has a collection and knowledge of movies from all over the world.