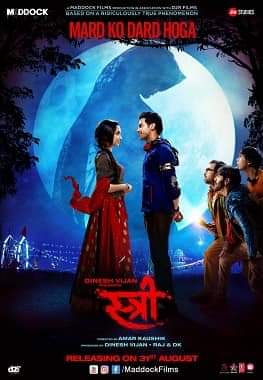 Well, I love films and I am fascinated by our very own Bollywood. Once I aspired to become Film Journalist and hence could never let go of the ‘reviewer’ hat. So here is my choices for the 2018 Bollywood films and performances in order.

Not a terrible watch, in fact it can still get a Five out of Ten on a first watch but sloppy screenplay and inconsistent halves dragged the film down. Which could have been bollywod’s ‘Watchmen’ ended up being just a decent attempt.

Not the best but amongthe finer films from the industry this year:

Best Performance in a Supporting Role

Best Film
■■■■■■
6. Raazi – How exactly an Indian girl could be compelled to become a spy for the nation and been asked to stay in the enemy territory? Meghna Gulzar, the director takes the intelligent approach to start the film answering the weakest point and thanks to the brilliant and brisk screenplay as the film progresses audience would eventually let go of the rough patch and be enthralled.

5. Stree – Pre-conceived notions about many things of life have been challenged this year in films and none had the wit to match this performance packed movie. This puts some serious light to the anomalistic treatment between two genders with lightest but memorable luminance.

4. Badhai Ho – A magical love story to say the least. The fact that this has been weaven beautifully with an unprecendented premise of their sudden pregnancy attcks the middle class mentality in our nation from several angle.

3. Mukkabaaz – A sportsman never likes to lose, be it his ground or in the field of love. But what happens when society and it’s corrupted morale takes a form of a vicious man who stands in his way to win at both fronts!

1. October – The movie ‘October’ is not a full circle story at all. In fact it is a reminder of the fact that life isn’t either. Perhaps life is indeed a box of chocolates of different shapes, colours and tastes. No one really knows which would be what.